...watching new fall TV! Yay! Finally! My favorite season premieres so far include Modern Family (I'm rooting for Andy!) and the new show, Life in Pieces, which made me laugh so hard my eyes watered.

...reading The Martian.  I read it in a single day. This is a must-read!  It's mesmerizing. I can't wait to see the movie. Our family has passed the book from person to person. It's one of those books that you need to get others to read, just so that you can talk about it. 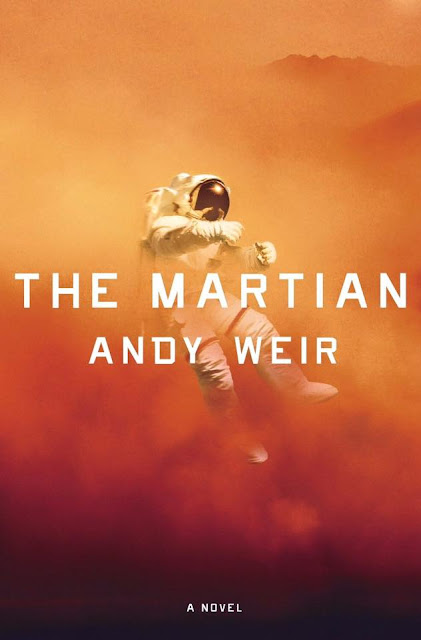 I'm in the midst of two books at the moment, Fahrenheit 451 (for my "Self and Society" class), and Frankenstein (for my "Beginnings and Endings" class). I never tire of rereading those.  They get better and better (and more and more relevant) every time I return to them.

...eating Hawaiian food. There is nothing quite like the trifecta of kalua pig, lomi salmon, and poi.

...loving the return of cool weather and rain, rain, glorious rain!  One of my recent pages for October Afternoon gives you a sense of what the weather has been like over the past month or so, and why we needed a reprieve. 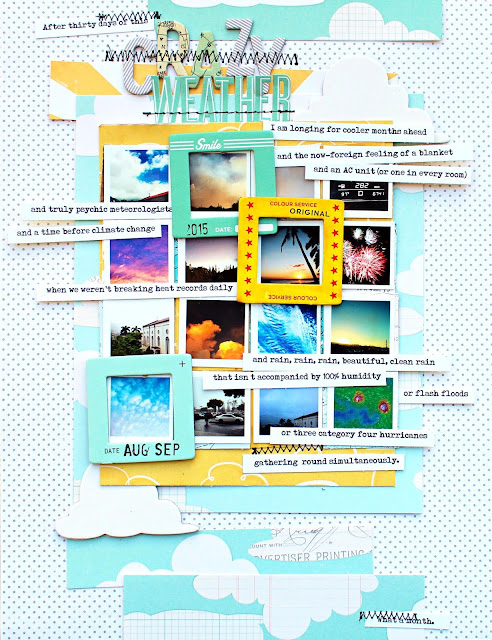 ...lamenting the fact that the weekend is nearly over. I really don't know where the time goes.

...looking forward to the new blog remodel at Scraptastic Club. It's getting there! Here's a layout that I created using this month's "Skinny Love" kit. 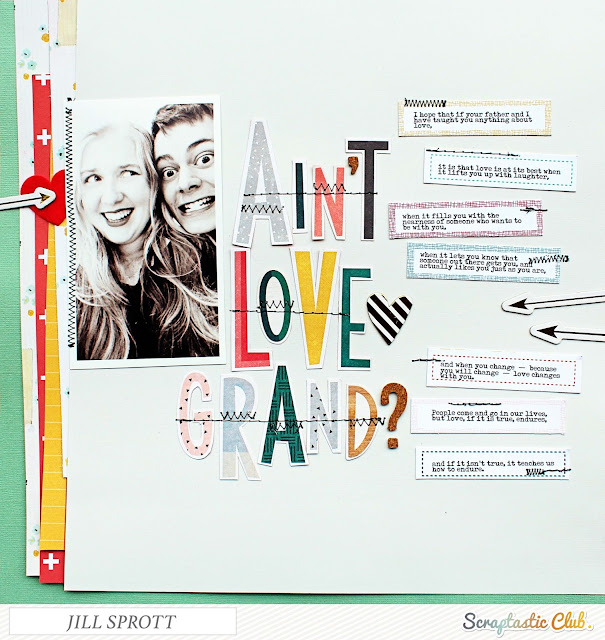 I am waiting oh-so-impatiently for the October Scraptastic Club "This Is Halloween" kit and add-on. I can't wait until it's in my hot little Halloween-loving hands! 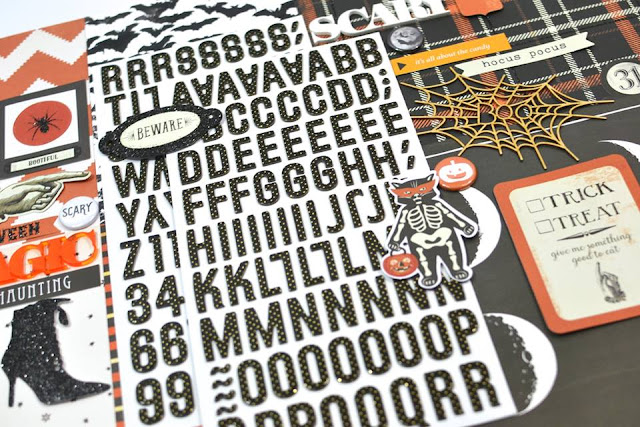 All of the Scraptastic Club kit galleries can now be found via Pinterest, by the way!

...missing the blood-red end-of-the-world super-moon phenomenon, because (1) I'm in Hawai'i, and (2) it's rainy and cloudy.  My Facebook feed is full of pics, though, so I didn't completely miss out on the shock and awe.

...hating goodbyes. This past week, we said farewell to our sweet friend Molly. She was a part of our family for 18 years. We'll miss her so much. 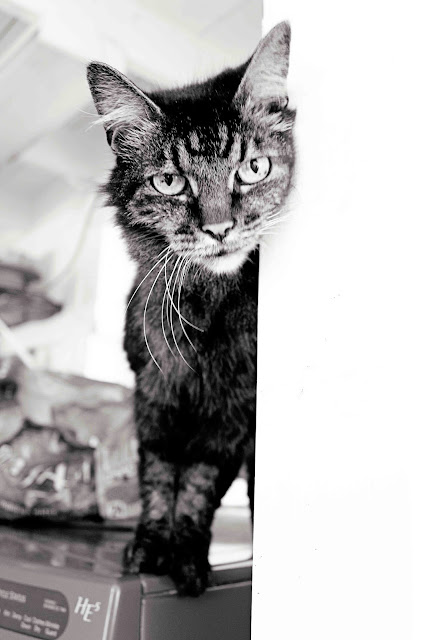 Take care, everyone! Be good to each other.  ;)

Are you a dog person or a cat person?

I never really know how to respond to this question.  I'm both!  If I had to choose between one or the other (unthinkable!), I'd likely go with a dog.  I can sense my cat's love for me, but I also feel her scorn equally as often (maybe more often, actually). With a dog, it's just all love, all the time. 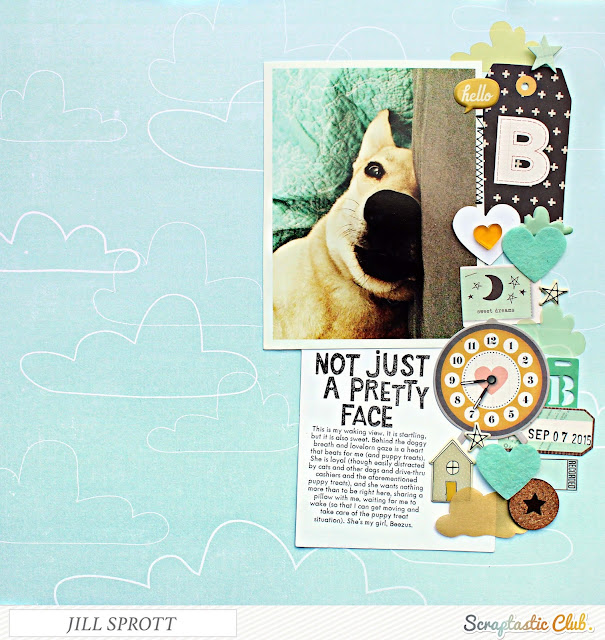 Recently, I opened my eyes one morning to this sight. Luckily, my phone was next to me, and I was able to capture the moment -- and now, if you weren't familiar with the sensation already, you know the thrill of waking to find your furchild gazing lovingly at you.

She's such a sweetheart. :)

I wasn't quite sure what to do with the pic, scrap-wise, until I opened the "Skinny Love" kit from Scraptastic Club.  Kismet! 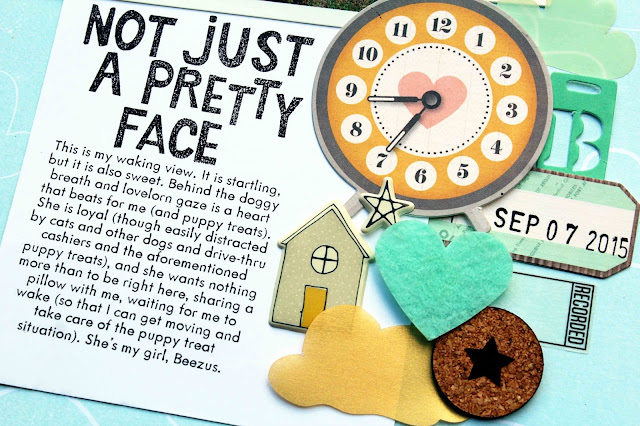 I loved putting this page together, and giggled practically the whole time that I was working on the journaling. Pet pages are so much fun!
Posted by Jill at 7:57 PM 4 much-appreciated comments

Sunday night already?! What happened to the weekend?

Today I had grand plans to get crafty; however, I spent my day in traffic. I went to drop off my daughter to meet with a friend for a few hours, which should have meant a 20-minute trip back home for me, but three hours later, I was stuck in traffic, just miles away from where I had dropped her off, so I ended up having to turn around to pick her up. The brilliant powers-that-be at the Dept. of Transportation thought that it would be a wonderful idea to do road construction ON A SUNDAY in an area known as a bottleneck and wait for cement to dry in the middle of a rainstorm.

Traffic seriously sucks around here.  If Oahu is in your travel plans any time soon, charter a helicopter to get from place to place, or bring a jet pack, as travel by automobile is just plain torture.

Since I spent my scrappy time idling in the car this morning and afternoon, I only had time to create one page before the sun went down today. :(  Waah. It's a sweet one, though, and I was happy to finally be able to dip into the new "Skinny Love" September kit from Scraptastic Club.

Erin Stewart (one of the Scraptastic DT members) and I are teaming up for this week's Pinterest-inspired challenge. We decided to take on this pin from Le Zoe Musings, which I originally saw posted on the Present and Correct blog.

I translated the idea of the "embellished" ice cube tray to a page that makes use of the many (many!) kitty-cat elements in the "Skinny Love" kit. 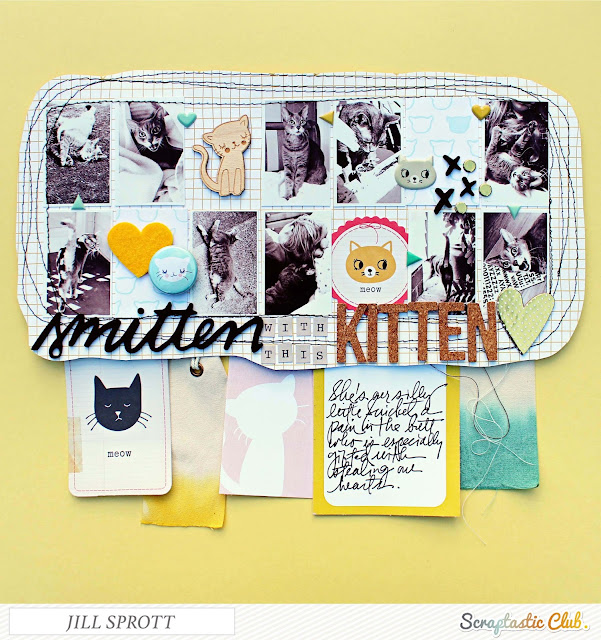 Well, I wish I had been able to do more today...but I am glad that I was able to make at least one page. Maybe I'll be able to steal a little more time this week. Fingers crossed!

Have a great week! May the roads remain open for you.
Posted by Jill at 8:52 PM 5 much-appreciated comments

There are certain times in the year when I become downright giddy when it comes to scrapbooking. One of these times is Halloween -- it's just so much fun to create Halloween-themed pages! -- and another is the beginning of the school year.  I love, love, love making back-to-school layouts. In fact, at practically any time of the year, I'm up for making school-related pages.

Usually, back-to-school pages have me thinking back to the bold, primary colors of my elementary days, but on my most recent layout for Elle's Studio, I opted to tweak the traditional red, yellow, and blue palette a bit, working with lots of pink, some aqua, and just a little bit of orange and yellow. 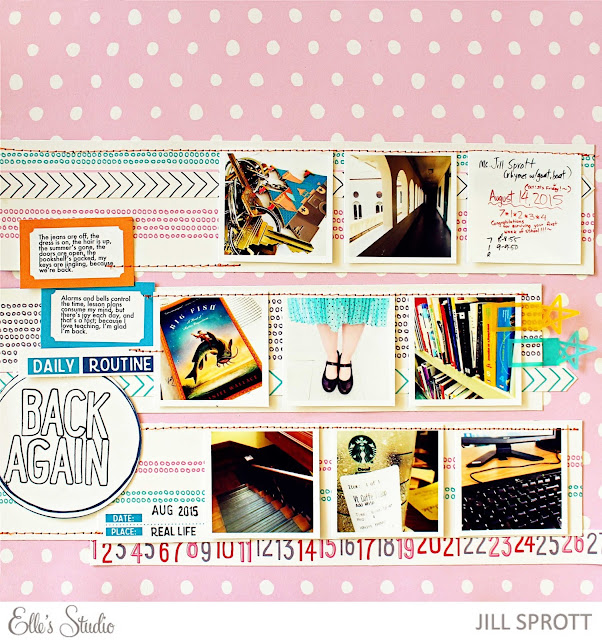 Today's the day for the Elle's Studio September reveal, and it's a big one!  There are two new collections -- Thankful and Joyful -- as well as a new September kit, all of which are used on the layout above. 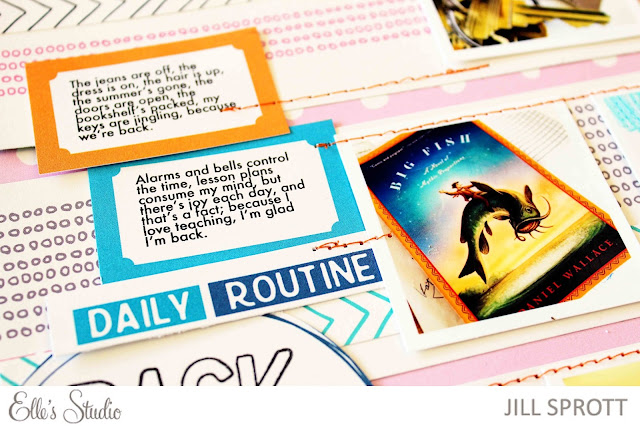 (I don't usually journal in rhyme, but I got a kick out of doing so here.)

The new lovelies also contain some of my favorite stamps EVER: three versions of the "Jordan" stamp set.

Aren't they awesome? I used the middle set, the "Jordan" outline stamps, on my "Back Again" layout. 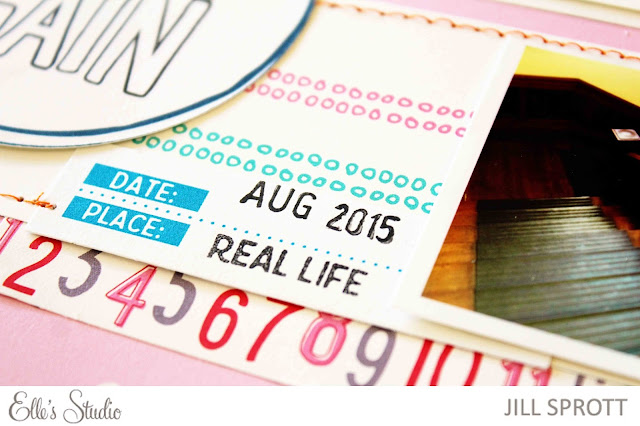 There are a bunch of new layouts in the Elle's Studio Design Team Gallery using these goodies. Be sure to check 'em out!
Posted by Jill at 6:33 PM 2 much-appreciated comments

And Then It Was September.

Can you believe it's already September? And how about this global warming? My dashboard showed 97 degrees in traffic yesterday, and when I walked in the house after work, the humidity made it seem as if it was 102 degrees inside.  Crrrrrazy.

It might have something to do with the fact that we are surrounded by three storms at the moment.

So far, September is not my friend.

I am feeling a little forgiving, however, since September is dangling that Labor Day holiday in front of me at the moment. Who doesn't love a three-day weekend? I'm just a little concerned that this heat means that instead of kicking back at home like I should be, I'll be seeking refuge in various air-conditioned buildings all over the island.

Okay, okay, so catching a movie (or two or three) isn't the worst way to spend a weekend, but I'd much rather be playing with paper. :) I'm finally on the road to scrap mojo recovery, and I'm feeling downright antsy right now. Must. Scrap. Soon.

Actually, I stole a little time yesterday afternoon and put together a quick page, based on a Scraptastic challenge to use ephemera, memorabilia, or "found" elements on a page. I had some extra FastPass tickets from our Disneyland trip. One night, the Indiana Jones ride broke down before we could use the tickets, and on another occasion, we didn't feel like getting soaked on Splash Mountain and sloshing around the park for the rest of the evening (we saved the soaking for just before we left each night), so we didn't get to use our FastPasses, but packrat me didn't throw them away. Nope...I knew they'd find their purpose elsewhere, and they have! 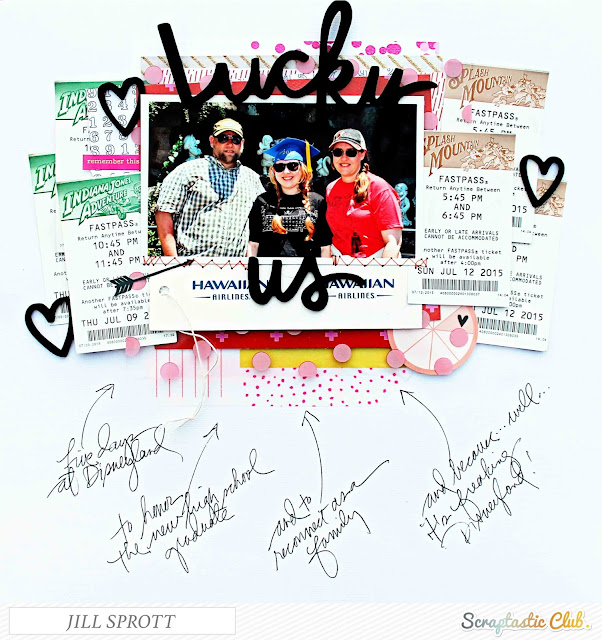 Last night I looked at this photo of us in Anaheim in July and realized that the weather was incredibly cool compared to what we've been dealing with around here lately!  Hawaii is a tropical locale, but we don't usually have unbearably hot weather like this. That's not normal. The kids in our NON-air-conditioned schools have been wilting, along with their poor teachers.

This is hurricane season as well, and a pretty active one at that. My poor cousin's wedding was almost ruined by an impending hurricane, but luckily, it passed us by.  We weren't allowed to say the "H"-word to her all that week.

The day was a beautiful one, for so many reasons that had nothing to do with the weather. 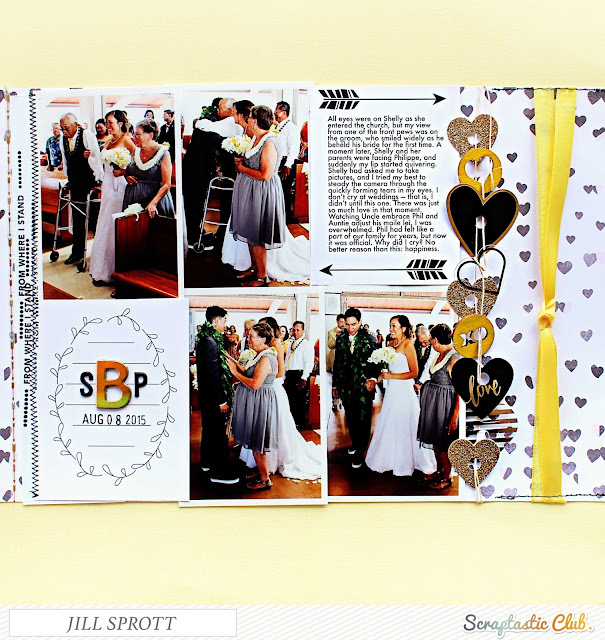 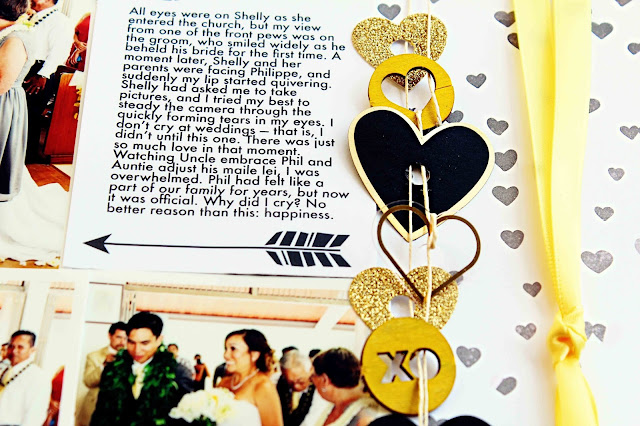 That was such a wonderful day. :)

Now, if you'll excuse me, I'm going to go sit in front of a fan and listen to my voice make cool sound effects while I continue to whine about the heat.