Do you ever find yourself taking seemingly random photos, only to discover later, as you go through your photos, that there is actually a pattern to be found?

Recently I realized that I have a fair number of photos of doctors' offices. Apparently, as these doctors kept me waiting, I got a little antsy and decided to do what we scrapbookers do best: document.  So I documented the yearly physical...and the mammogram...and the eye exam.

In looking at these photos together, it occurred to me that I had never created a layout about my attitude toward my health and doctors' visits. Sure, I've put together "pep talk" pages about changes in my diet or exercise habits, but I've never actually reflected on my view about seeking help from a professional when the moment calls for it. 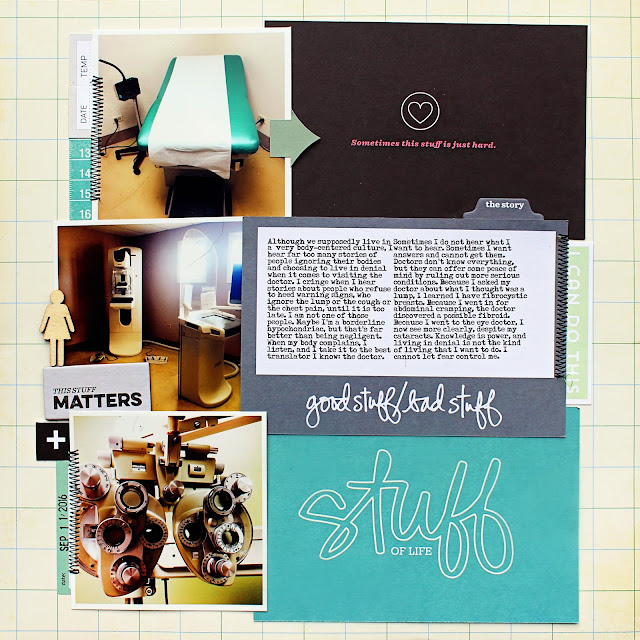 Quite a few of my family members have, in the past and present, avoided doctors until a problem became so serious that it resulted in major surgery, a chronic condition, a serious decline in the quality of living, or, sadly, death.

As we age, health problems become scarier and more common, and the likelihood of a doctor saying something we don't want to hear becomes greater. That's enough to foster a pretty strong inclination toward denial. Still, I don't want to compound any problem by ignoring the signs. 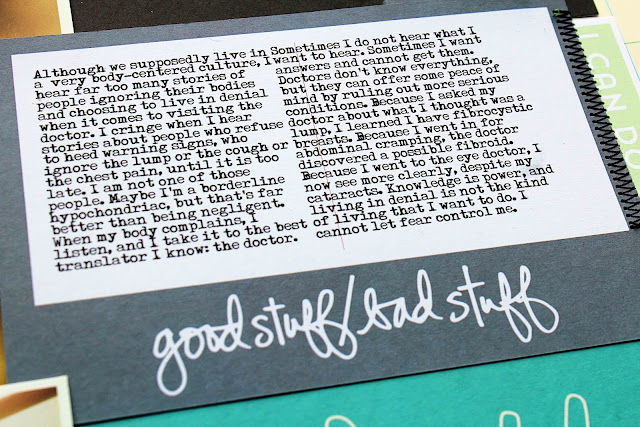 The "Stuff" Story Kit from Ali Edwards helped this layout along. The "good stuff/bad stuff" card prompted the journaling.  I'm kind of bummed about the alignment of the journaling, though. Everything was measured perfectly in my word processing program, but when I ran the card through to add the second column, the alignment of the paper in the printer was off, and the columns ended up too close together.  Ah, well...I forgive me. :) 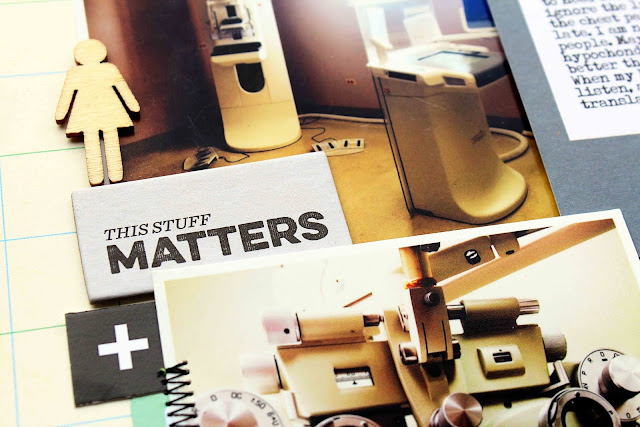 This chipboard sentiment pretty much sums up the page and the reason that I created it: this stuff matters.
Posted by Jill at 7:33 PM 1 much-appreciated comments

This month's kit is color-rich and packed with cards and tidbits. 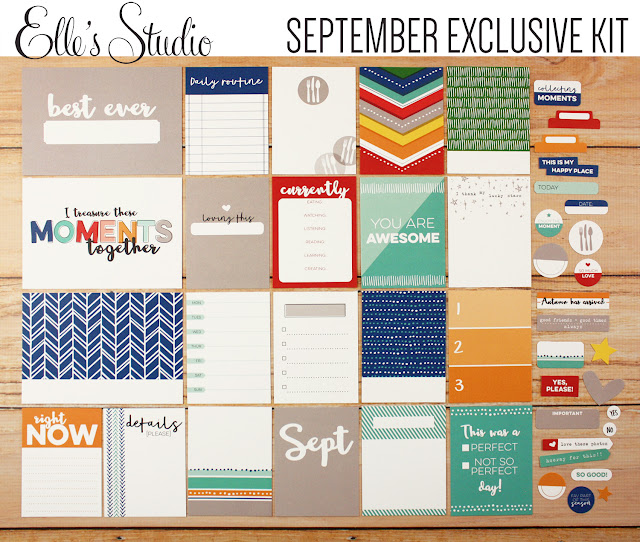 I used a few pieces from it on this page: 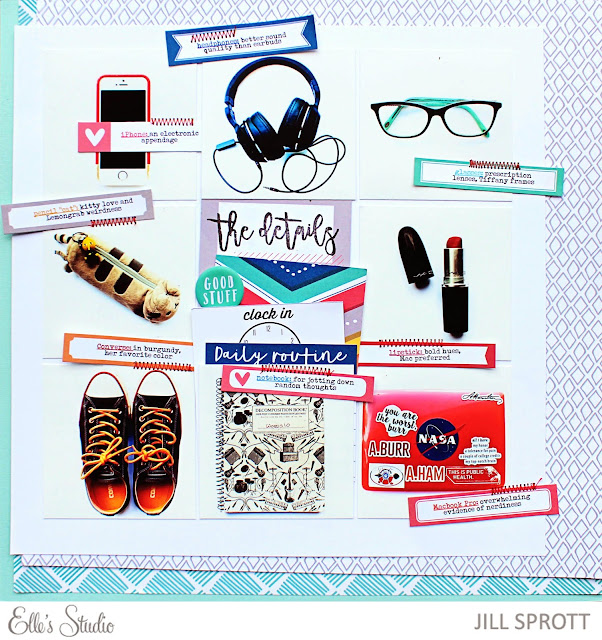 I haven't always been the biggest chevron fan, but the bold colors in the chevron pattern on one of the cards in the September kit called to me as I layered cards in the center block of the grid on this page. 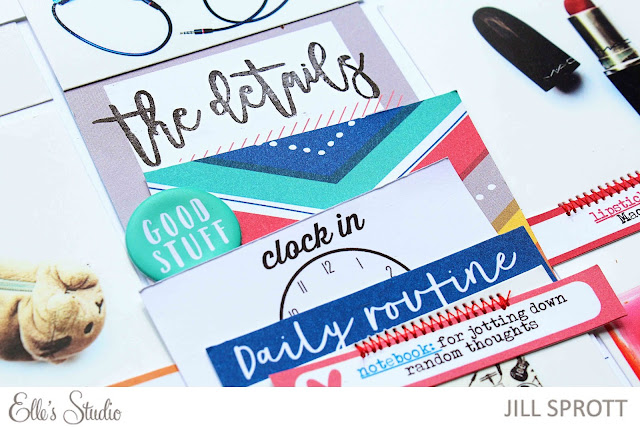 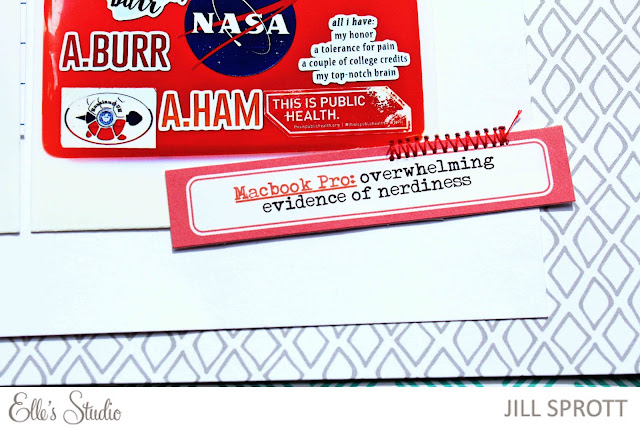 I shared a step-by-step process for this layout earlier this week on the Elle's Studio blog, if you'd like more info.

The September kit also makes an appearance on this layout, which I created to document a daily trial I've been facing lately with regard to trying to develop healthy habits and stick to them. 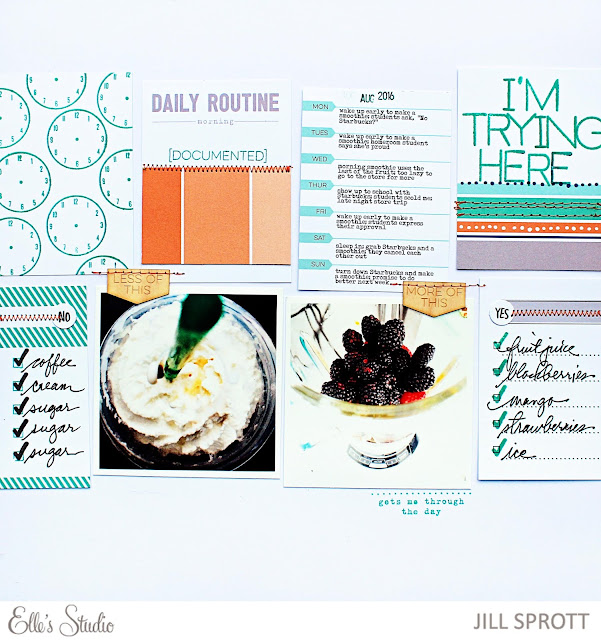 The shift from Starbucks to smoothies hasn't been too easy, but it helps to have students who actually notice what I'm drinking each morning, and who cheer me or scold me as needed. 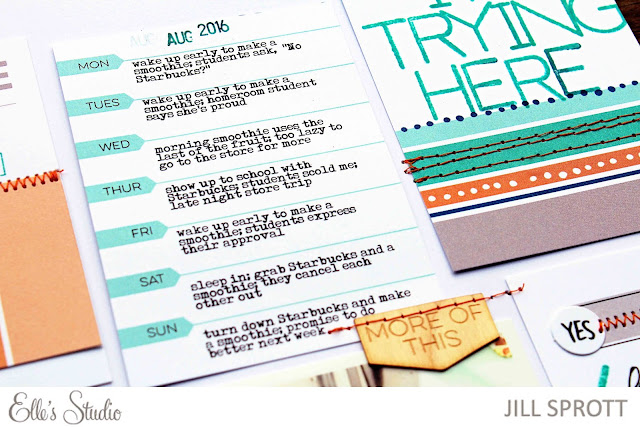 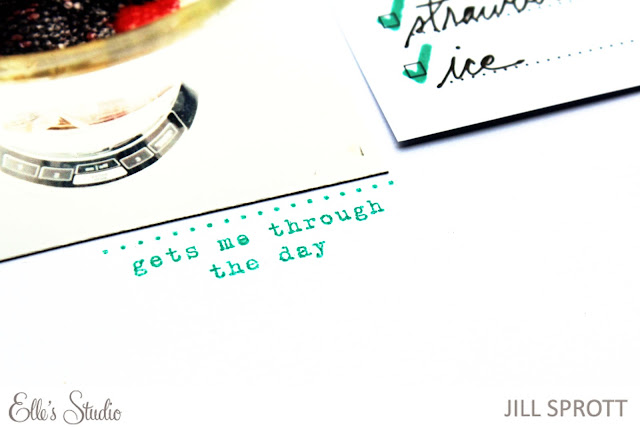 There are a lot more layouts from the design team on the ES blog, and many will be featured throughout the month on the site, so be sure to stop by to check them out.

Thanks for visiting today!
Posted by Jill at 5:00 AM 1 much-appreciated comments

I can't believe that it's already September -- but I must say, I'm a little glad to bid farewell to August. It was a butt-kicking month, what with the the transition back to school, way too many appointments, a week apart from my husband, and two hurricane warnings. 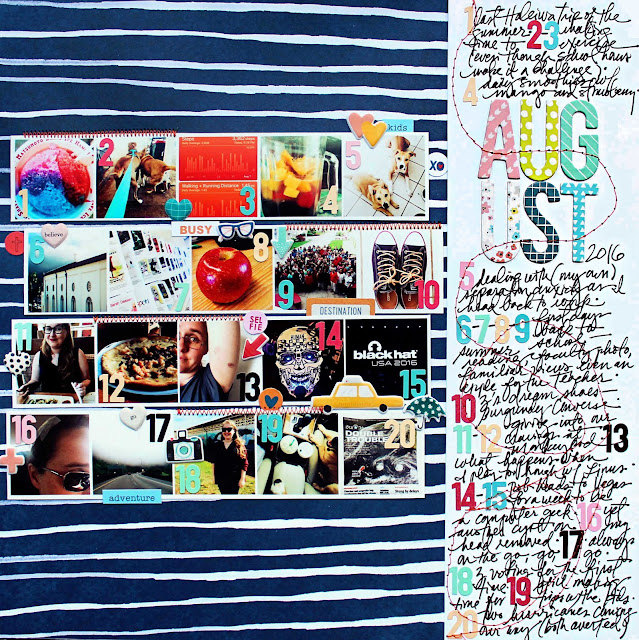 Now that September is here, I've acclimated to the school routine, my body and I are getting along again, the hubs is back, and the hurricanes have passed us by.

Still, August was anything but boring, as this layout reveals at first glance. It was busy and colorful and crazy, and that's not necessarily a bad thing for a month to be.  Periods of time like that give rise to changes.

In a single month, I've met about 70 new students and learned all of their names. I look forward each day to spending time with them and the students I have come to know over the years. Because of them, I'm pushing myself to be an even better teacher.

In a single month, I've gone from a healthy, daily exercise routine, which was really quite easy to keep up with since I didn't have to work all summer, to a much more sporadic routine. When work started again, I found myself exhausted, driven toward the couch, or coming home and needing to make dinner right away, with no time to exercise before the sun went down.  However, it's made me realize that staying healthy is a choice, and that even if I can only get in a 20-minute walk, that's still something.

In a single month, I've shifted from a nearly-Starbucks-free summer to having Starbucks nearly every day during my first week back to work...and then, with the help of scoldings from my students, I realized that I was willfully falling back into old habits, and I started making smoothies for myself every morning.

Some changes I can't control (like the changing paths of hurricanes), but some I can, and I'm trying to be increasingly mindful of that when it comes to discerning between what I want to do versus what I should do.
Posted by Jill at 10:10 AM 3 much-appreciated comments